We are working to insure assessment of anchorage risk and possible mitigation be completed before a decision is made on Vopak's petrochemical terminal proposal. Since 2014, highly skilled Master Mariners, tug crews, etc. have prevented a grounding incident in the estuary, however there is reason for concern.

Tanker anchorage and loading dock events are shown below along with an unofficial interpretation (also see bulk carrier storm events). Officially confirmed "risk of grounding" events will eventually be reported on Transport Canada's website but this may take a year or so. It appears a Liquid Propane Gas (LPG) Tanker was loaded despite storm warnings, then sent to weather out the storm at anchorage #9 which is a few kilometers off Kitson Island and Flora Bank salmon habitat shown above. A tug stayed with the loaded LPG tanker through the worst of the storm, which may have reached hurricane force, to keep it from dragging. Anchorage #9 appears prone to anchor dragging.

Storm Warning for January 28 was issued on January 26 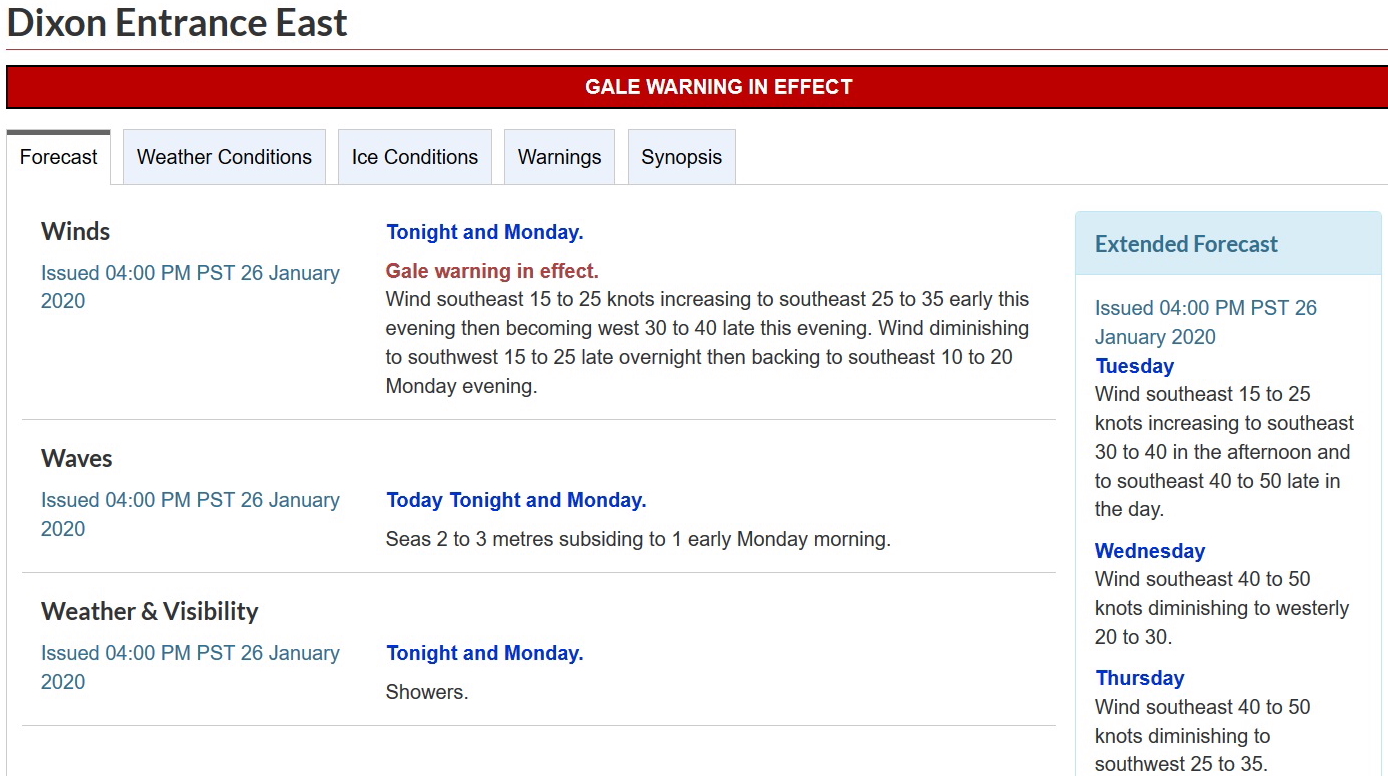 Storm force winds were forecast as early as January 26th 4:00 AM, before the LPG tanker loaded. The Extended Forecast issued by Environment Canada warned of winds SE 40-50 knots for late in the day Tuesday 28th. (Storm-force wind: Wind speed of 48 to 63 knots inclusive)

Here is an image of the track of Umm Laqhab LPG tanker taken at 12:46 AM Jan 27th 2020. It comes into Anchorage #9 where it appears to have anchored, held at anchor for a period and then appears to have dragged about 200 m from its original swinging arc to a second swinging arc where the anchor then seems to have held (there may be alternative explanation for the large movement after anchoring, perhaps a large addition of anchoring chain).  Although the apparent drag does not continue on this occasion, when only gales were forecast, a large drag, even one which stops, is an indication of poor holding ground. The tanker is to scale and is 225 m. 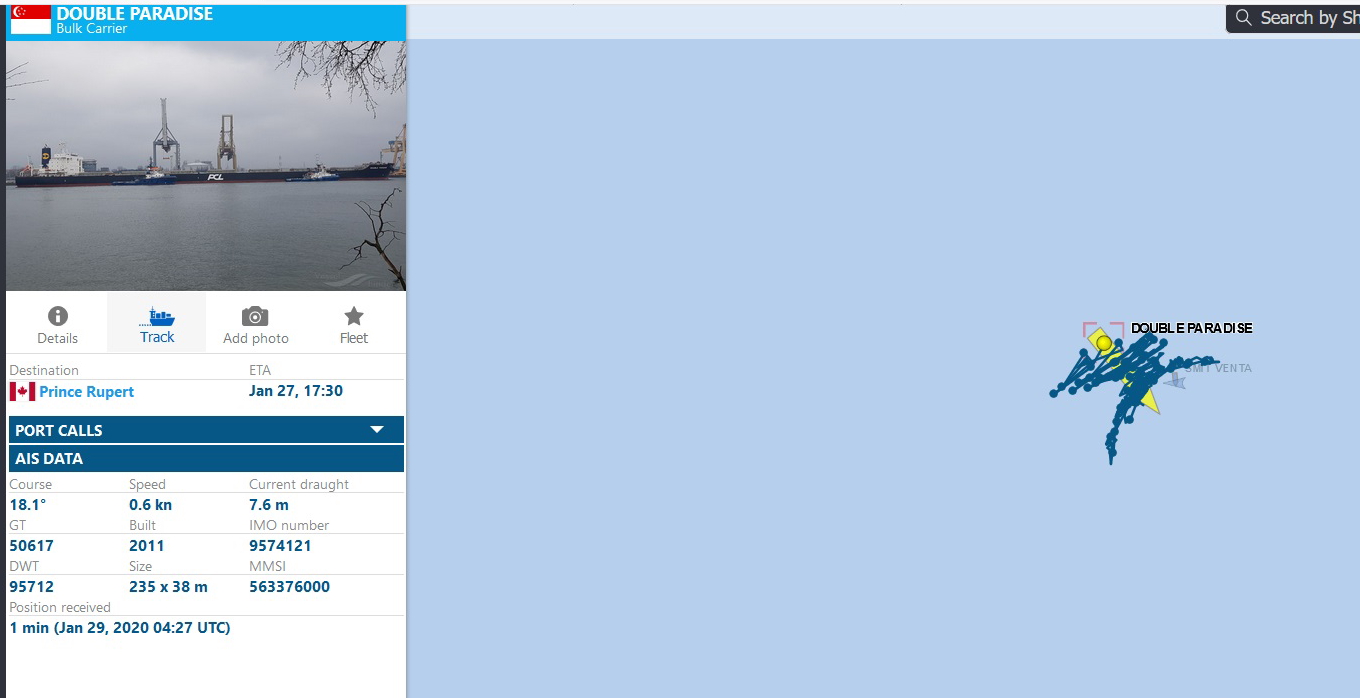 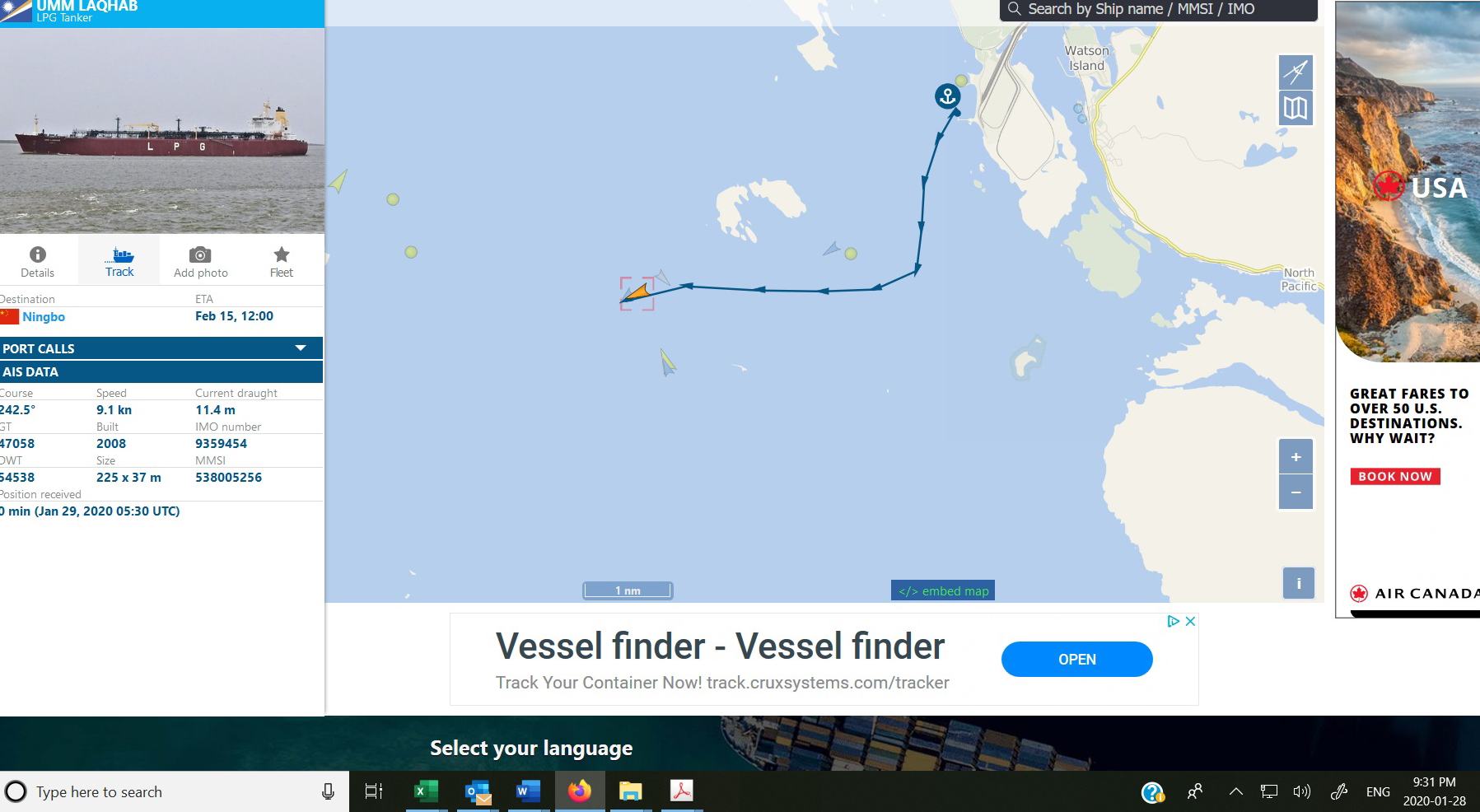 Jan 28 9:30 PM, near the height of the storm, the loaded LPG Tanker (the orange ship icon) is moving out from the loading dock returning to Anchorage #9. It is about to pass the Double Paradise (the yellow ship icon just south of it) which is traveling from Anchorage #9 after apparent difficulties there. 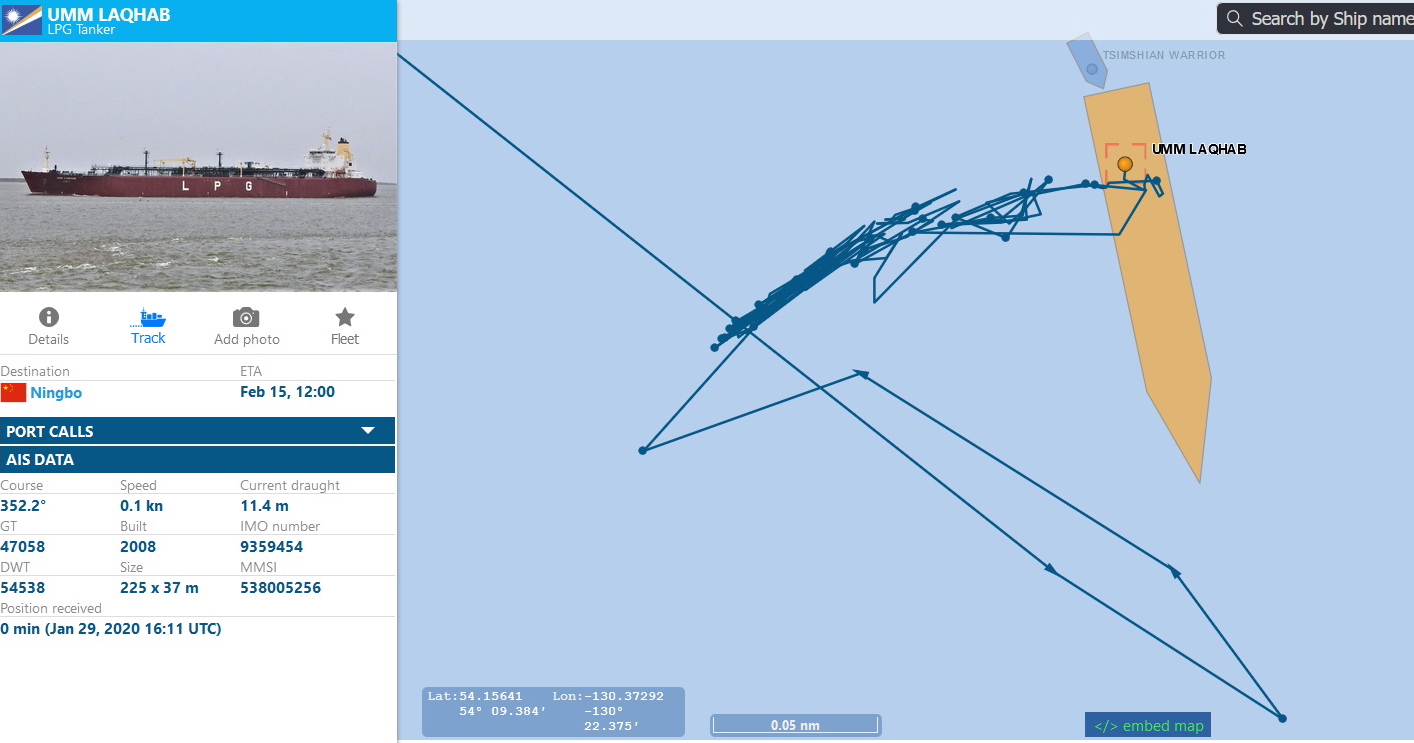 This image was taken the morning after the storm; it was taken Jan 29 at 8:30 AM. It shows the track of the Um Laqhab back at Anchorage #9 after visiting the loading dock (presumably to load with liquid Propane). It returned to Anchorage #9 accompanied by the tug Tsimshian Warrior to weather out the storm/hurricane. The Tsimshian Warrior is visible as a blue icon directly at the stern of the tanker. Our observations suggest it remained with the loaded tanker throughout the storm and prevented it from dragging. After the storm was over the Umm Laqhab left the harbour directly without returning to the loading dock. 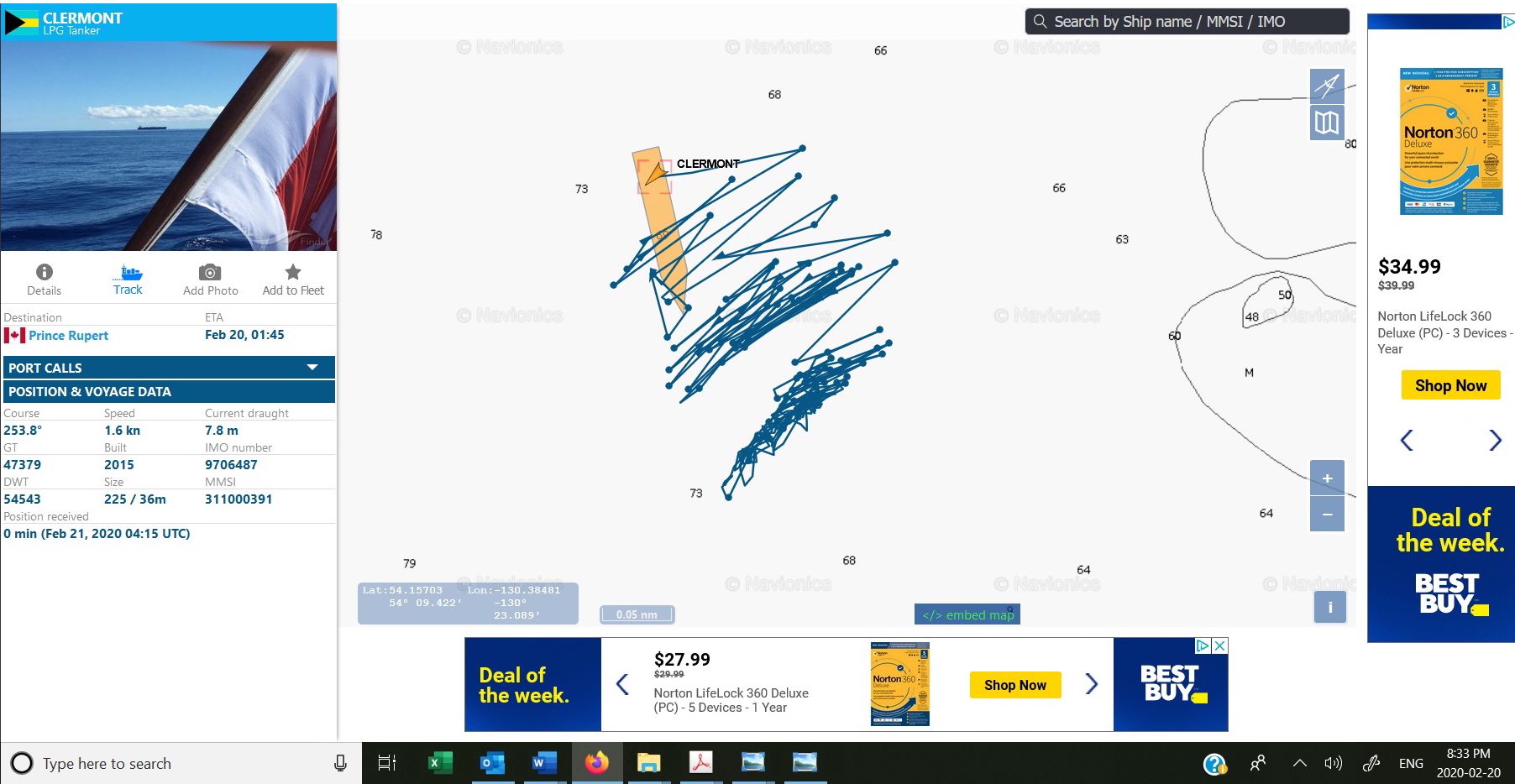 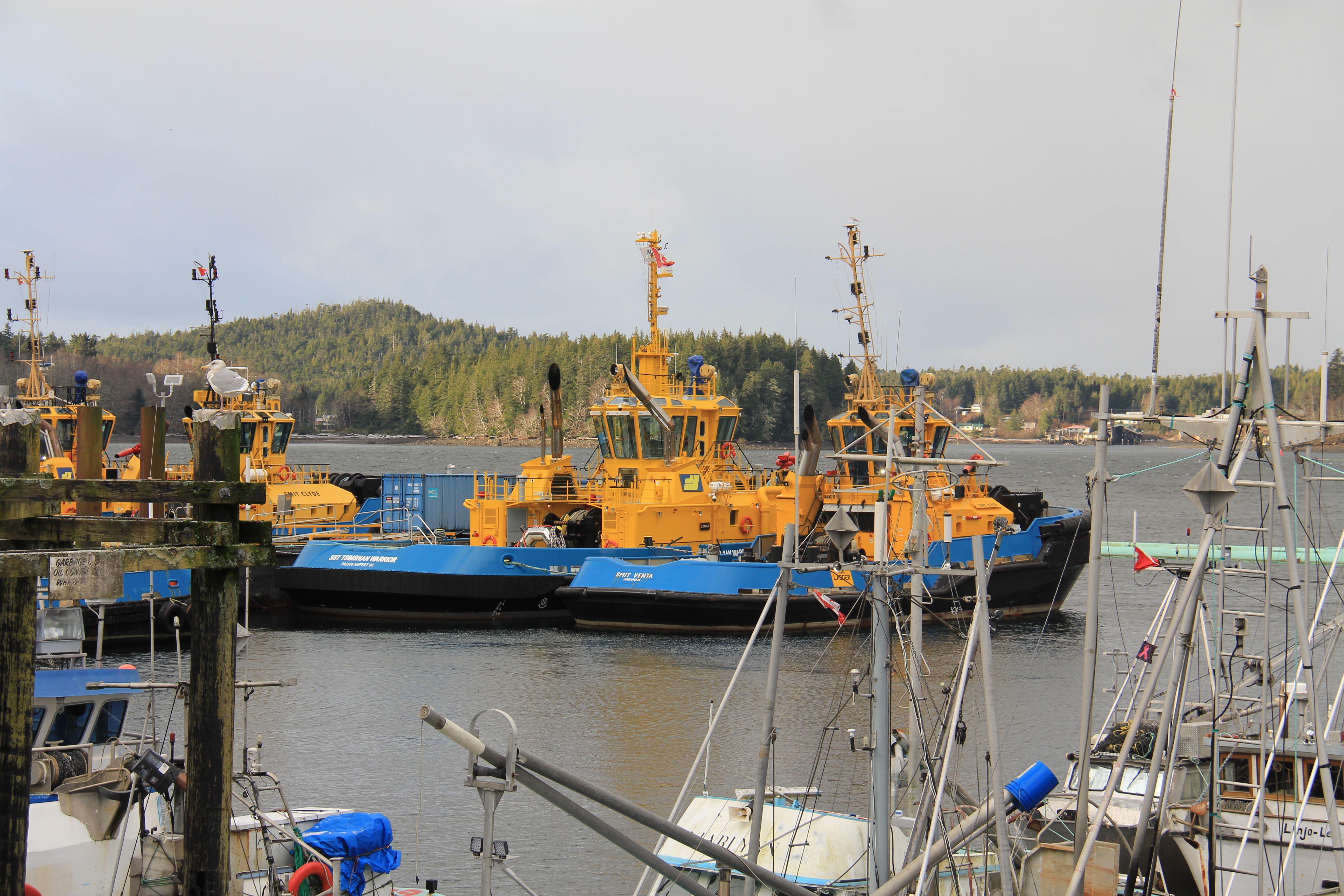