To give folks a sense of the scale and frequency of anchor dragging incidents we present a chart showing Prince Rupert anchorages and a series of images showing the January 30th 2020 AIS tracks of seven large bulk carriers which appear to have dragged anchor: Pedhoulas Commander at anchorage #15, Sakizaya Diamond at #6, Whitehawk at #5, Santiago Basin at #17, Kurenai at #25, Scarlet Island at #29 and Belatlantic at #4.

These and other examples for 2018-2020 have not been officially confirmed as "risk of grounding incidents" in Transport Canada's list. There is a very long delay, eleven have been confirmed for 2017. Each incident increases the risk of a fuel spill in the estuary. 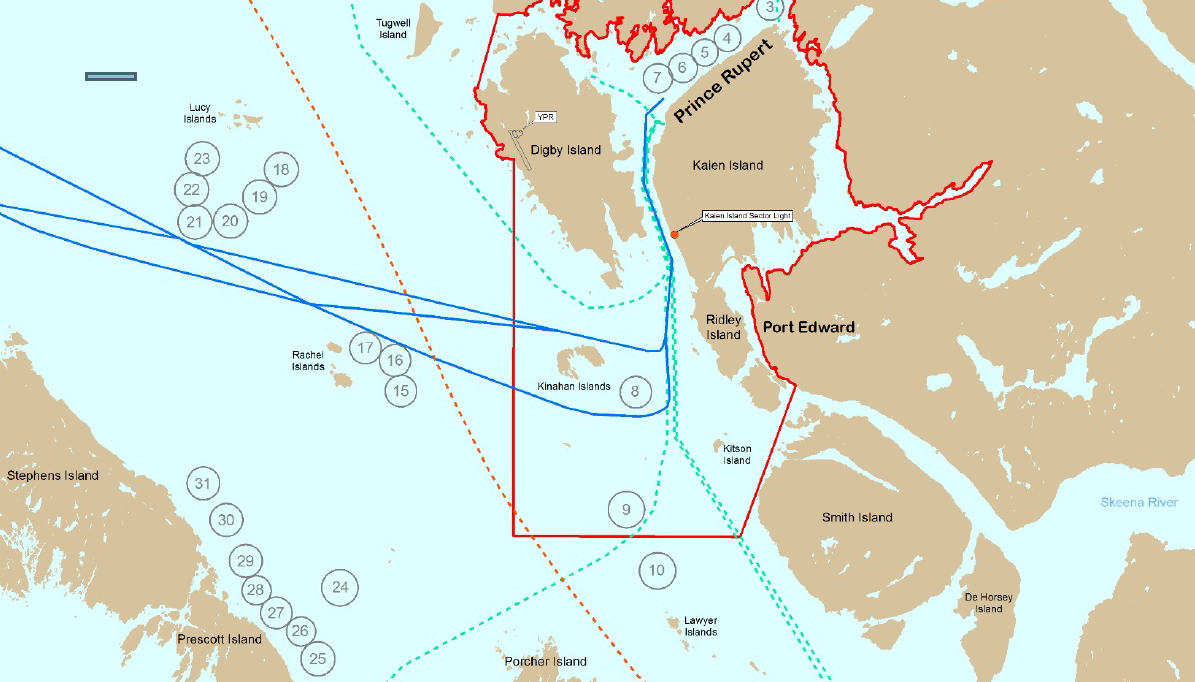 Images may be distorted in some media.

Pedhoulas Commander, at anchorage #15, appears to have 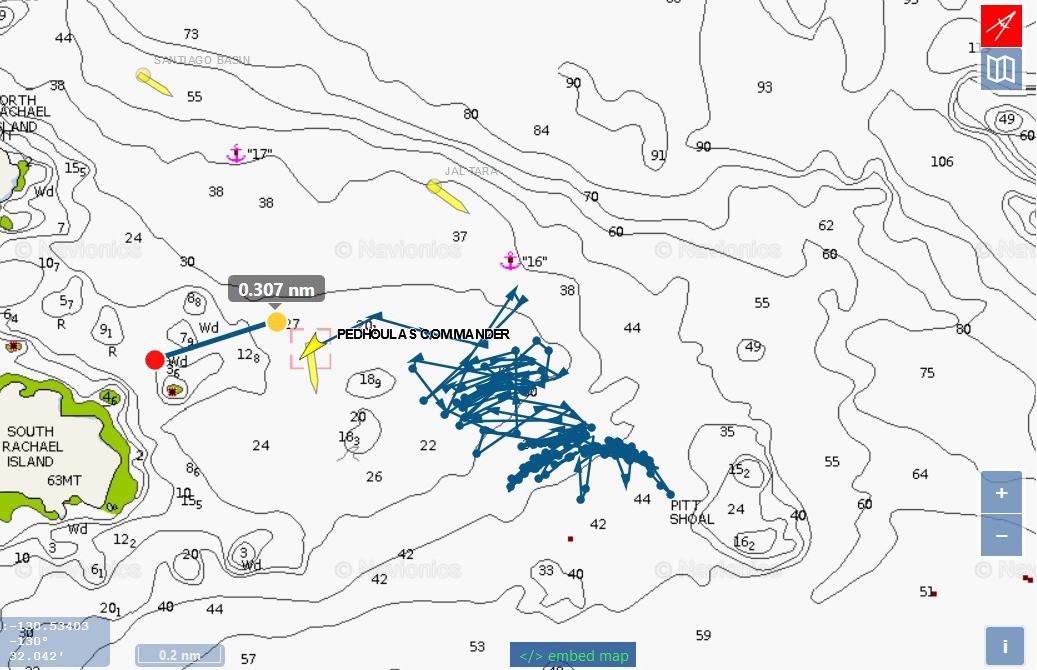 dragged anchor more than half a kilometer before maneuvering out, without a tug present, about 9 AM January 30th when the Airport registered SE winds gusting 48 kn SE (89 km/hr). At one time she appears to be about 500 m from a grounding hazard at South Rachel Island and at another less than 400 m from the anchored Jal Tara both of which were downwind of her.  The vessel is to scale and is 229 meters long. 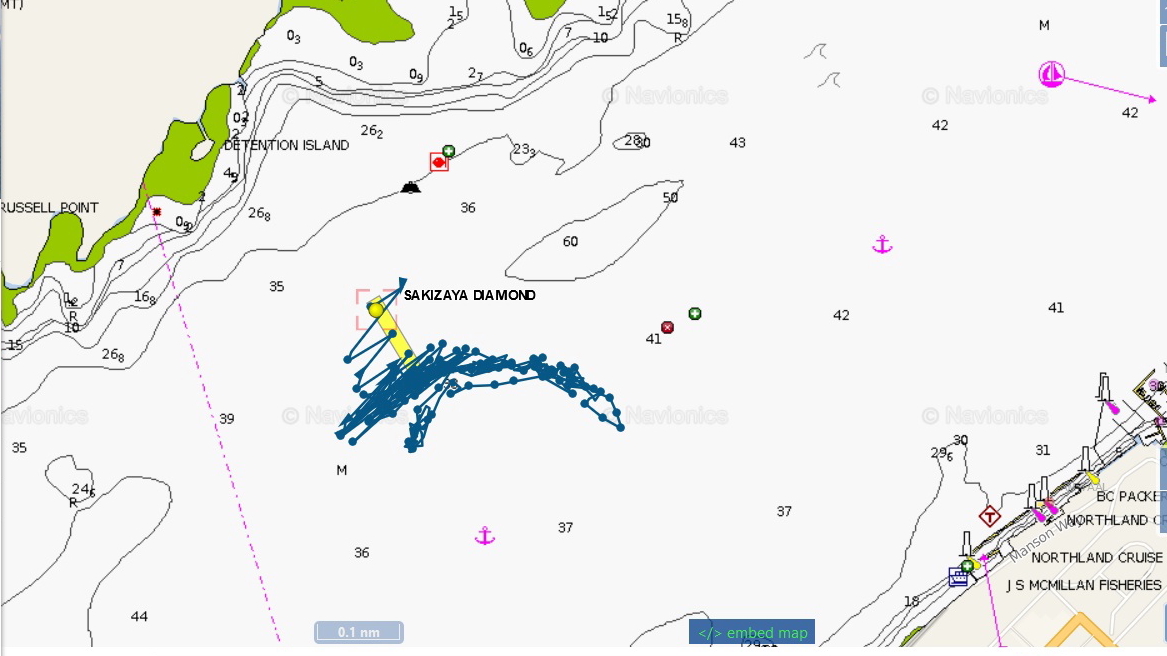 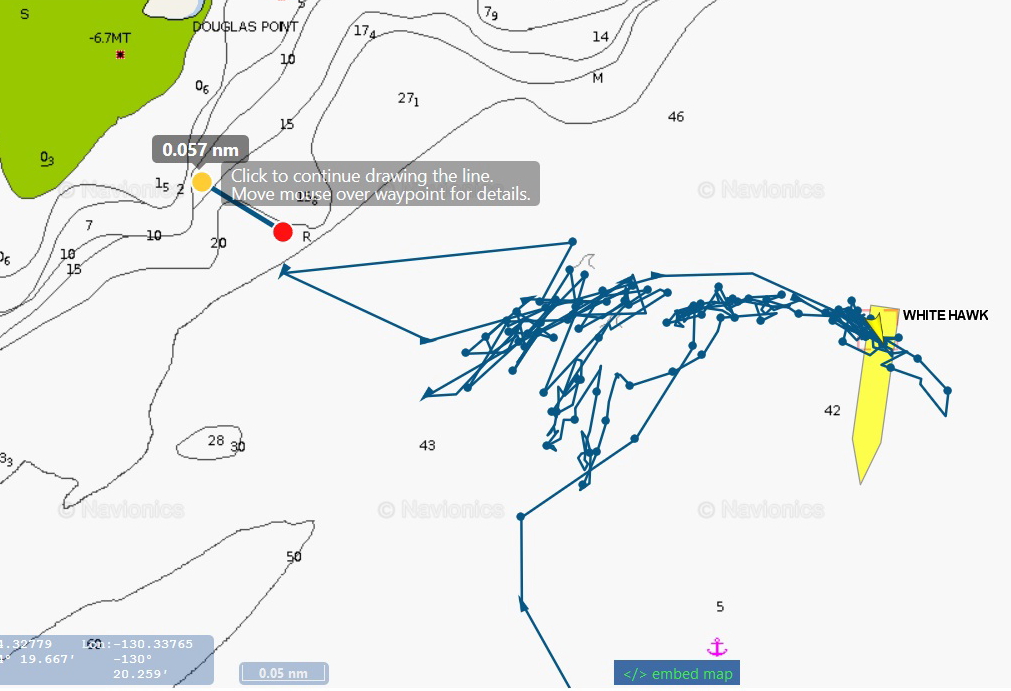 to have run into difficulty in this 6.30 AM January 30th She had re anchored here at #5 at 8 AM Jan 29th after having been moved from #7. She appears to have run into difficulty again at this anchorage, coming to within about 150 m of grounding hazards off Douglas Point in the inner harbour. She left anchorage #5 about 9.30 AM on Jan 30th without tug escort and winds reported to be gusting SE 48 knots at the airport. The vessel is to scale and is 200 meters long.

Santiago Basin at anchorage #17, was anchored 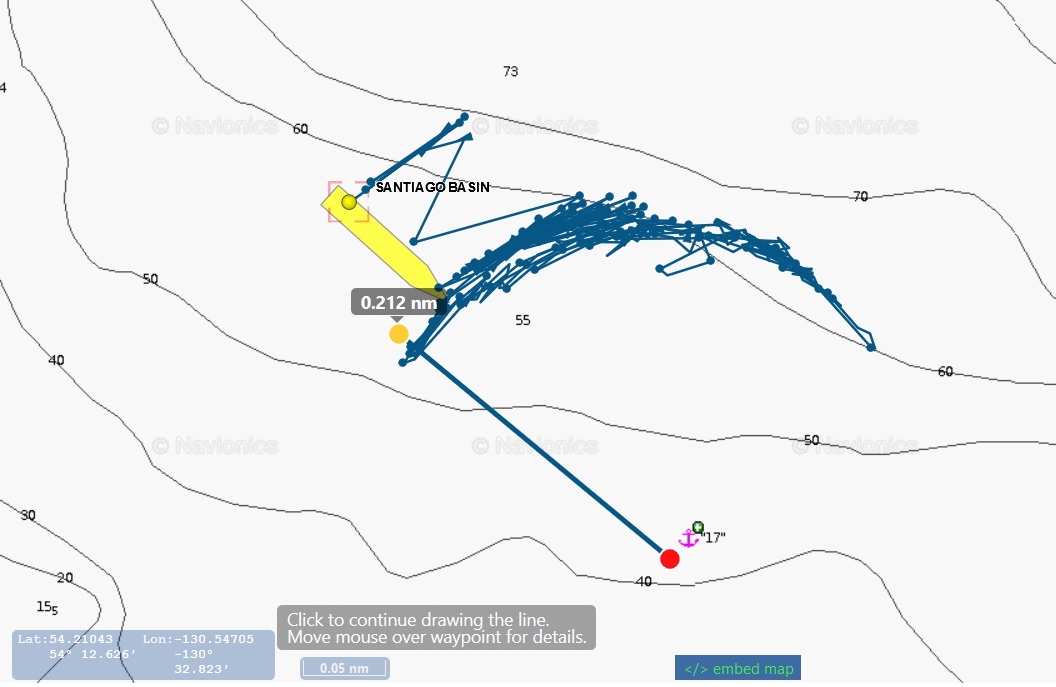 off the Rachel Islands on January 29th and 30th. She appears to have dragged anchor by well over 100 m. The vessel is to scale and is 180 m long.

Kurenai at anchorage # 25, anchored off 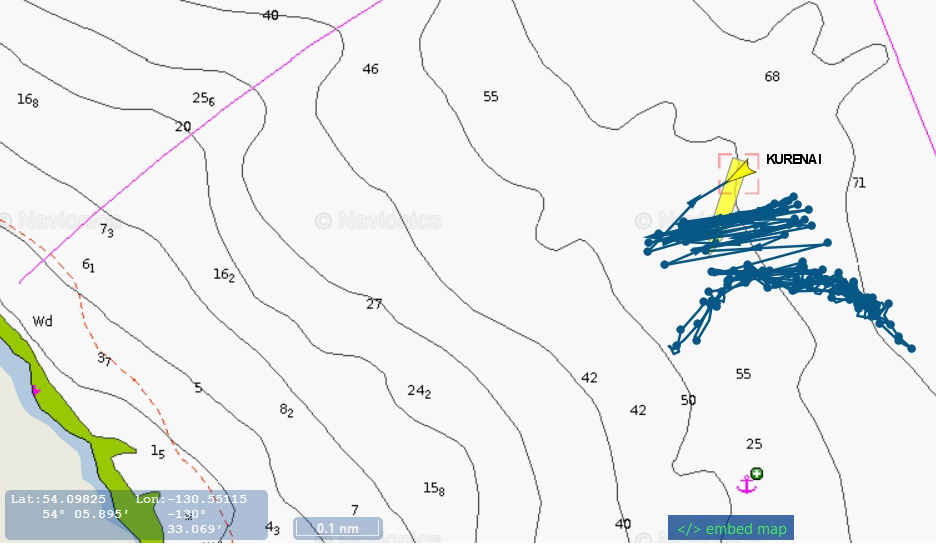 Stephens Island appears to have dragged anchor over 150 m in this image of her track taken at 7 am January 30th .

The Kurenai is 228m long and is shown to scale though partially hidden under the blue track lines. 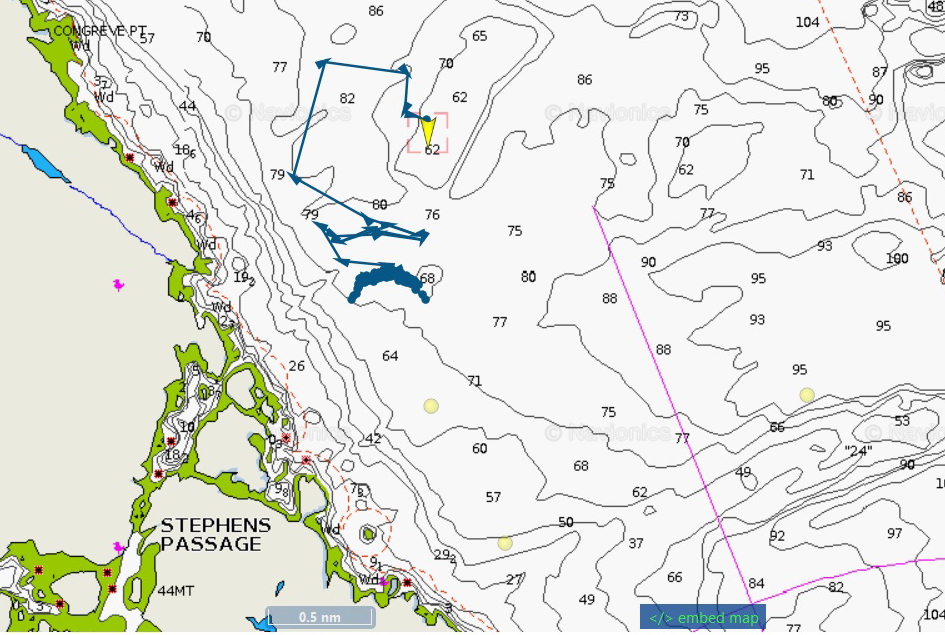 to have dragged anchor badly off Stephens Island. In this image, taken at 6 AM January 30th, it appears to have left the anchorage without a tug present and winds reported to be gusting SSE 37 knots at the airport and 53 at Rose Spit. The vessel is to scale and is 229 m. A tug arrived at about 6:45 AM to assist it. 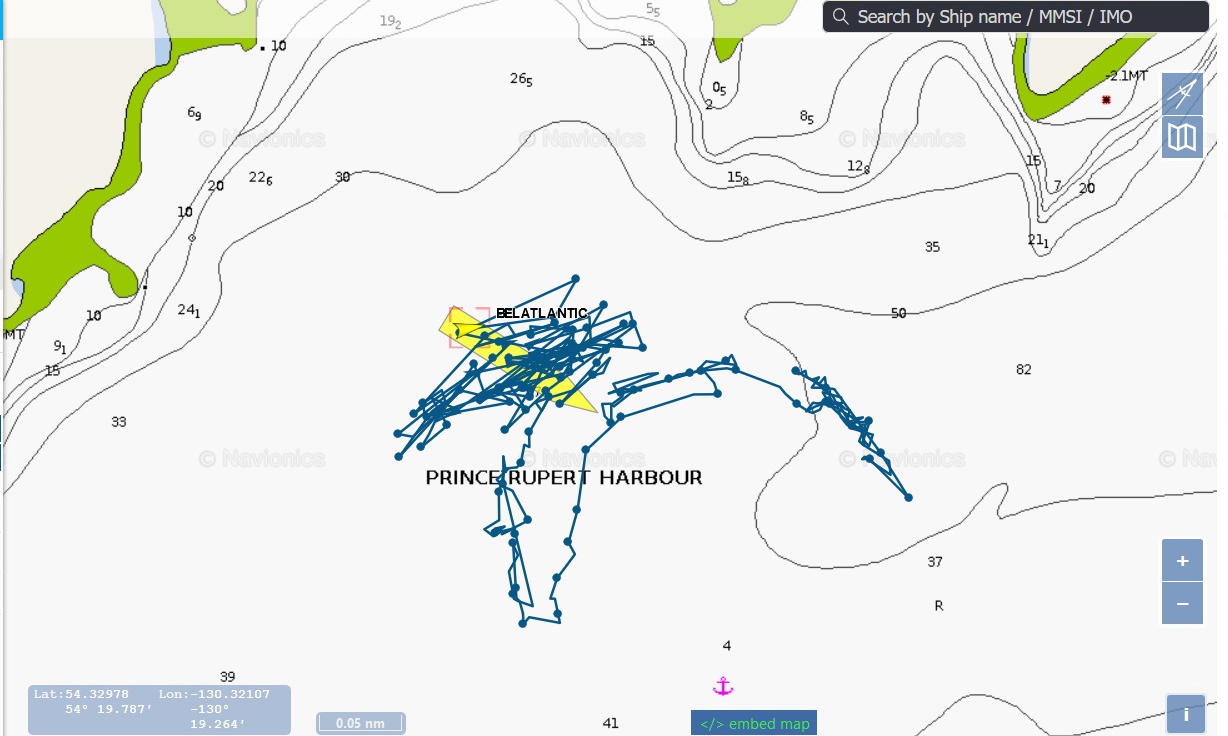 to have dragged anchor, coming within about a boat length of shore with no tug present. The time of this track image is 10:30 am January 30th with winds reported by the airport to be gusting 46 at 10 AM. The vessel is to scale and is 199 meters long.